For those of you who haven't been to the Salcedo Community Market at the Jaime C. Velasquez Park on any given Saturday, you don't know what you're missing.

Jaime C. Velasquez Park a.k.a. Alfaro Park has always been my favorite oasis within the city. In the past, I often took the kids to play there while my wife and I would do some brisk-walking along the perimeter. Late last year, I had heard that there was a weekly market going on every Saturday. I never really came around to check it out until today. And so I discovered that it was called the Salcedo Community Market.

I don't mean to wax nostalgic but the entire thing immediately brought back a kaleidoscope of images from a very happy past. Images of the summer fiesta in Bel-Air park as a child. Images of the Portobello Market around Notting Hill Gate in London around 14 years ago, and images of the Sunday market in the old town of Ronda in Spanish Andalusia.

What makes the Salcedo Community Market so fun is the wide choice of food on sale. You name it. From native fare to the continental, they have it all. There's lechon from Cebu, chicken dinuguan, grilled gindara, all the way to exotic pasta sauces. There's fresh lumpia from Kalibo, and other delicacies from Bacolod. At Alfaro Park, you will also find some dishes from La Cocina de Tita Moning. And then of course, there's Ineng's. The famous barbecue which has unseated the liempo skewers of Aling Nene's fame.

If you've been to Market!Market! and have seen the long queue waiting for their turn to pick up some barbecue sticks at Ineng's, you would immediately know that Ineng's barbecue is really stuff to kill for. And so it is a great relief to know that one doesn't have to go all the way to Market!Market! in Taguig in order to satisfy the craving for Ineng's barbecue. She's just right here at the Salcedo Community Market. And while there still remains the trademark queue which always forms behind an Ineng's counter, the line is more manageable and less aggravating. After all, it seems like not too many people have really discovered the wonderful food fiesta at Alfaro Park on a Saturday morning. 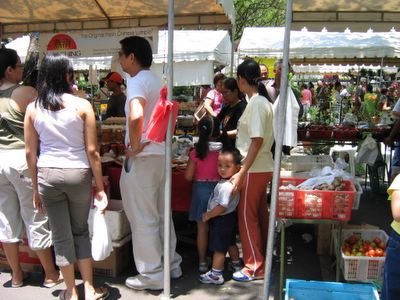