The CompanY at 25. A Silver Celebration 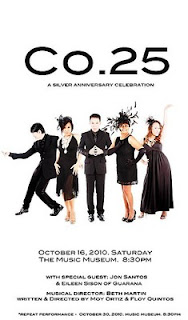 On October 16 and 30 (both Saturdays), Asia’s premiere vocal group, The CompanY, celebrates its 25th anniversary with a concert performance entitled CO.25 at the Music Museum (Greenhills) at 8:30p.m.

The last quarter of a century has been productive for The CompanY, having been blessed with 19 studio albums, 39 music industry awards (Awit, Katha, Catholic Mass Media), 2 video releases, 3 solo television specials, national and international vocal workshops, and countless concert tours both in the Philippines and abroad.

This anniversary concert is divided into five acts that blend various art forms from the worlds of music, dance, photography, film, video art, performance art, theater and fashion. The show is an unapologetic blend of high art with lowbrow sensibilities, the complex with the simple, the poignant with the ridiculous and the esoteric with the commercial.

From jazz to classical, from Broadway to folk music, from pop to doo-wop, from acoustic to electronica, from world music to Original Pilipino Music (OPM), from a cappella to symphonic – The CompanY’s repertoire for Co.25 runs the breadth and width of vocal music in its various genres.