IN BACOLOD CITY : Celdran to walk the talk 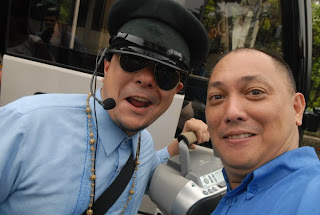 Tour guide Carlos Celdran will give a talk on his Manila Walking Tour at the Social Hall of the Provincial Capitol Building in Bacolod Tuesday, October 26, 2010.

Celdran’s talk, organized by the Negros Island Tourism Inc., will include a period in Manila’s history centering on Intramuros and his formula for pinpointing tourist attractions, a press release from NITI said.

Before the talk, Celdran will join the new Alliance of Tour Guides of Negros in a walking tour around Bacolod and Silay City.

His Manila Walking Tour has taken the tourism industry by storm, the press release also said.

The tour that has been featured in an article in Time Magazine as one of the best ways to get to know Manila has been attracting not just foreign visitors but domestic tourists as well as local Manila residents, the press release said.

Local LGUs and tourism stakeholders are expected to attend the talk. A limited number of seats will be open to the general public, the press release added.

Carlos Celdran is shown above with photographer, John Tronco