Gastronomic Delights In Iloilo: Sweets For The Sweet

Image by An Asian Traveler

I give up. I could never seem to exhaust talking about Iloilo's gastronomic delights. In this post, however, we differ from the other stories we've given before in that we won't point you to the places where rich and delectable meals can be had; we're pointing you to the havens of one kind of food that may characterize the famed Ilonggo demeanor: sweets.

Ilonggos are said to be a very sweet, malambing, affectionate people. Indeed, as a migrant to Iloilo, a resident of give or take 20 years, I can say with a not-quite-outsider's objectivity that the Ilonggo people are a gentle, caring, compassionate, and yes, sweet, people.

That being said, here are our tips to where you can indulge your sweet tooth in Iloilo City:

Biscocho Haus. Before there was Tinapayan, there was Biscocho Haus. Already an institution in Iloilo, Biscocho Haus has been giving Iloilo and its tourists great pasalubong selections. From the famed Biscocho to the Broas to Galletas and even Garlic Bread, Biscocho Haus has treats that even locals can't resist. But that's not what keeps my sweet tooth happy from Biscocho Haus. What I go back to, time and again, as my hit of the sweets, is Biscocho Haus' mouth-melting Butterscotch. Since the day I tasted it when I was in my elementary years, no other Butterscotch could make me sniff through entire bags in one sitting. Other than the Butterscotch, my other Biscocho Haus fave is its delicious Banana Cake. There are new items on Biscocho Haus' product list, so check out its Facebook Page and mark your shopping list for the next time you head to Iloilo!

Tinapayan haunted me during the years when I was living in Manila. Tinapayan is Iloilo Supermart's in-house bakery. It gave Iloilo a taste of fine pastries at an affordable price. I was midway through my Elementary school years when I first tasted their to-die-for Danish Blueberry. In those days, Tinapayan was the first to introduce Iloilo to International breads like French Breads and Croissants. Today, it offers more International breads and more innovative pastries that could satisfy both your palate and your budget. My personal favorite include its line of brownies, especially the Mint Chocolate brownie.

Dulgies is Iloilo's answer to Bacolod's Calea. At least, in the minds of us consumers who try to pit the two together. But in the spirit of unity, let's just say that pitting Dulgie's to Calea would be like waging a contest between a Sapphire and a Ruby. Both have their finer points, and if you want to pair your coffee with a Dulgies Cassava Cake on Monday then a Calea Chocolate Moist on Tuesday, it's still going to be one delectable tastebud experience.

Dulgies is founded and owned by the daughter of Ted's Lapaz Batchoy's owner. Its main branch is in La Sallette building in front of SM Delgado, and there's a Dulgie's stand in Ted's Lapaz Batchoy on Diversion Road near Smallville.

Before I leave this topic, I'd have to say, that Dulgies' Caramel Pecan Cheesecake is just divine. 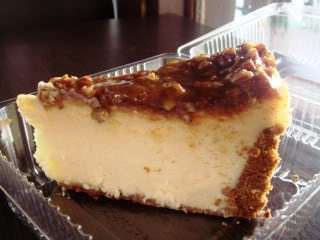 Iloilo is home to a lot of other sweet havens. A franchise of Dulcinea has secured for itself a great spot in SM City Iloilo, as well as the hearts of the Ilonggo food connoisseur. Goldilocks, Red Ribbon and other sweets franchises are also in Iloilo. But Iloilo's age-old sweet shops are there for you to savor, still. Deocampo's, home to melt-in-your-mouth barquillos, toasted round cake, among other pasalubong items. And don't forget to savor Iloilo's mangoes. The Guimaras Mango is not the only kind that Iloilo offers. For some other mango aficionados, the Leon Mango tastes better. No contest here, as the Guimaras Mango is bigger, sweet, and bred for the most perfect a Mango can get this side of Heaven. But the Leon Mango is smaller, creamier and leaves you dreaming of the next time you can grab ahold of one.

So when you go to Iloilo, make sure you pack some Charantia (Ampalaya Tea or Capsules). With the sweet treats that promise to take you to Sugar Never-Never-Land, you may well need it!