A+ A-
Print Email
In my talk about "Why Visayans Should Blog" at last year's Visayas Blogging Summit, I made mention of golf first coming to the Philippines by way of the Sta. Barbara golf course in Iloilo.  The British engineers carved a neat golf course out of Sta. Barbara's verdant terrain.

Little wonder then that Ilonggos have displayed their fancy antics for golf here and abroad.  Luis "Golem" Silverio, son of a sugar planter in Bacolod was the first Asian to step on Augusta's hallowed greens in 1966, long before any other Thai, Chinese, Japanese, or Korean made it there.  Then there's the late Vinice Godio who has been dominating Sta. Elena's Ladies Championship for so long a time.  My nephew, Justin Limjap recently won his chance to play in Japan in the hopes of getting a slot in the British Open.  The names go on.

Then of course, this item from the other week when my son played in Sta. Elena.... 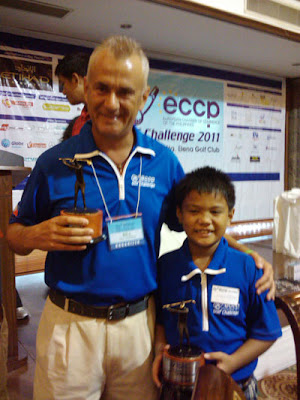 Even with an allergy and runny nose, my son played beautifully today in Sta. Elena at the European Chamber of Commerce of the Philippines' Golf Challenge. Applause filled the room during the awarding ceremonies when his name was called and walked to the stage to receive the trophy as Class C 1st Runner-Up. I guess no one expected an 8 year old to walk up and place in a tournament played by grown-ups.

He beat the rest of us including ECCP Tournament Chairman, William Bailey, who is shown here as the 2nd Runner Up in Class C. :) Said William Bailey : "Hard to believe an 8 year old can beat a 46 year old".