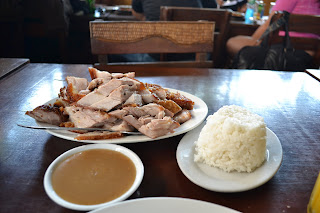 Credits to The Scribbler's Mom
For the avid fans of Visayan cuisine, a gastronomic experience will not be complete without tasting one of the grilled delights that abound in the Visayas. From Cebu, to Panay to Bacolod, the home specialties claim one version of something grilled or roasted. Cebu boasts of the crispy CNT Lechon, Bohol's Lechon de Leche's are to-die-for, Bacolod has their inasal and inihaw havens, and Panay Island has Ramboys and La Nena's.

Both Ramboys and La Nena's reportedly hail from Aklan, though a source says it's from Antique. Either way, when Ramboys hit Iloilo, the slabs of liempo never stopped getting snatched off the hot grill by 6PM. If you wanted a slab for dinner, you have to get to the outlet way before 6PM so you could still catch one. Ramboys is THAT hot!

What is the allure of these two liempo brands that has taken the Ilonggo -- and its visitors' -- palates by storm?

When I first tasted Ramboys, my eyes flew wide open because of three main things: the tenderness of the pork meat, the crispiness of the skin, and the beautiful porcine aroma that met every bite. I didn't need the sauce at all, I was chomping down on heaven in bites!

La Nena's, on the other hand, is more preferred in Aklan, where the two brands compete head-to-head. The La Nena's liempo isn't as crispy or as tender as Ramboys, but the meat has a distinct flavor that can be attributed to a lengthy marination. I remember the meat as succulent with a tangy hint of lemongrass. Certainly delectable, and it's not hard to see why others prefer La Nena's to Ramboys.

However, it would be worth noting that Ramboys has moved on to conquer other locations in the region. As mentioned, Ramboys has opened and is now a fixture in Iloilo City. There is also a Ramboys in Roxas City, where it's fast becoming part of the local cuisine.

I remember a legend about how roast pork came about: Set in a province in China, a boy was minding his family's sucking pigs when his house burned down and the pigs with their house and things. He tried to see how he could salvage the pigs but the pork skin was so hot to the touch, he had to put his fingers in his mouth to cool them. He tasted the flavor of the burnt pigs and realized it was tasty and started eating them. His father caught him, and tried to stop him from desecrating the dead suckling pigs, but the hotness of the pig flesh caused him to do the same thing his son did. So they feasted on their precious suckling pigs instead. That was how the modern-day lechon was born, reportedly.

While that story may or may not be true, one thing is certain: in these islands we call home, roast pig is a delicacy we will continue to enjoy. From bagnet to lechon to liempo, slabs of roast pork will be on the fiesta table for years to come.