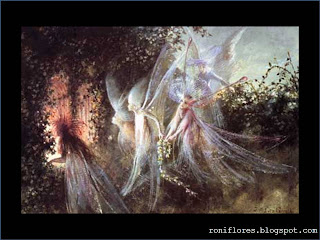 Image by The Diary Of A Super Girl
Being a daughter of Mindanao and Visayas, I was exposed to the local superstitions early on. Though I hardly believed them, I was taught by my caretakers that "dwarves," "elves" and "white ladies" abound, and if I walked through the night, I should keep saying "tabi-tabi" in order to warn the "Not Like Ours*," or the supernatural beings, that I'm passing through.

My caretakers warned me that if I stepped on any of these creatures, they would harm me or my family. Supposedly, offending the "Engkantos" would cause them to infect you with boils or unexplainable sicknesses. Other superstitions of a similar nature were that these fairies or enchanted creatures live in trees. And if I play too near these, they could kidnap me. According to my Ilongga aunts, should I get kidnapped by the fairies, I should never, ever eat their food, or else I'll be trapped in their world forever.

I am not sure if people who were born and lived in Metro Manila could relate to these superstitions. I believe that people from the provinces of Luzon did believe in these, as "tabi-tabi po" is part of the language. Either way, these superstitions that were alive, well and believed in in the 1980's and even the 1990's certainly remain figments of the imagination today.

I did wonder why they didn't pick me. Was it because I wasn't fair enough? Or pretty enough? Or fairy-worthy? I would never know. The only thing I know is that I'm glad I never had to make the decision whether to eat their food or not.

*"Not Like OURS" was really the term the people in my Mindanao town used to refer to fairies, elves and the like. I'm not sure where it came from, but it must be a Filipinized version of "Not Like US."