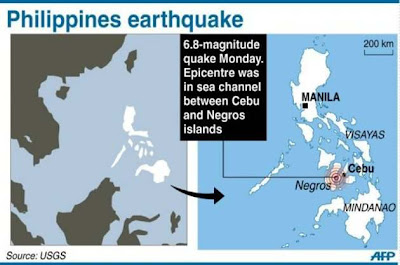 Today, Negros, Iloilo and Cebu have experienced a series of earthquakes. The epicenter was in a sea channel between the islands of Negros and Cebu.

Reportedly, there are now at least 44 who fell victim to the damages caused by the quake, and this number included 2 young girls, an 8-year-old and an 11-year-old.

In Iloilo, blackout affected the whole city when the Coal-Fired Power Plant automatically shut down for safety reasons. The Iloilo City Government also canceled classes and called off the workday, as private companies and government agencies alike took to heart the safety of its people.

In Cebu, panic for fear of a tsunami ensued as reports of seawater rising reached its people. The fears were unfounded, however, when PHIVOLCS, then lifted the tsunami warning at 2:30 PM when it was clear that no tsunami may result from the tremors.

It is worth noting that the Government of the different affected cities were more vigilant about coping with this calamity. Worth commending, too, were the governments and the private institutions who called off the workday to keep their employees safe.

Pray and stay safe, everyone.