Singing Another Ode To The Tablea

Raindrops on roses and whiskers on kittens,
bright copper kettles and warm woolen mittens,
brown paper packages tied up with strings,
these are a few of my favorite things.

I'm sure the circa-80's kids would be able to relate. For the young 'uns, pardon me for waxing nostalgic. But here's a video to show you what I mean:


The Sound of Music

Like this video, chocolate is among my favorite things. And mugs of hot chocolate made from boiled cocoa tablea are high up on my list.


In spite of the delicious decadence of cocoa from tablea, in some parts of the Philippines, the traditional breakfast and merienda drink seems to be losing its appeal. In Kalibo, Aklan, the gateway to Boracay, cocoa tablea rolls are nowhere to be found, as I already said before.

In Iloilo City and Bacolod, chocolate rolls are still very much in demand. Maybe it's the indulgent nature of the Ilonggo and the Negrense that give them the desire to still consume the delicious drink, maybe because both cities are honoring their heritage, with the newfound awareness to celebrate their roots and culture, or maybe, some areas in the Philippines just aren't aware of the beauty of history's legacies. Either way, cocoa tablea is an icon of history that seems to have died here in Kalibo, Aklan.

If cocoa tablea still seems to thrive both in Iloilo and Bacolod, would it come as a surprise, if I reminded you that hot cocoa bastion and choc-nut recipe haven Tsoko Nut Batirol is already a cozy hot cocoa sanctuary in the heart of Makati? 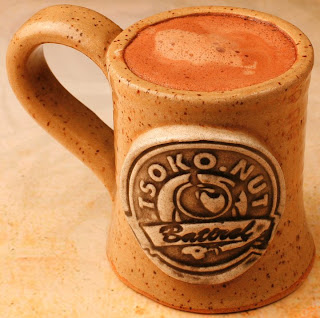 Tsoko Nut Batirol took its name from the instrument used in making the cocoa frothy. There is a science to making a perfect cup of thick, frothy cocoa, and the secret seems to lie in the tools of the trade.

To make rich, frothy, thick "Tsokolate Eh," more pieces of cocoa tablea are required. Some use 5 to 7 tablea pieces. After it has been dissolved fully in 1 and a half cup of boiling water, it is then whisked to a froth using a Batirol and a Batidor. The Batirol, otherwise known as the Tsokolatera is a pitcher-shaped cast-iron vessel that's a little narrower. The Batidor's handle is rolled back and forth in between one's palms. The motion will whisk the chocolate inside into a froth.

Tsoko Nut Batirol's signature concoction is the Tsokolate Ah, which is the watered-down version that the servant class of Filipinos consumed in Spanish times. While this certainly sounds unglamorous, the extenders that are added, like crushed peanuts, pinipig, and the like, are what make this drink creative, innovative, and at times a whole lot better than the thick and sometimes overwhelming Tsokolate Eh.

Now that I've given you a run-down of tablea hot cocoa and Tsoko Nut Batirol, I'll give you a tip where to find the cheapest cocoa tableas: in Dingle, Iloilo Province, 30 minutes away from the city. There you can buy tablea at Php 16 to Php 18 a roll.

But that's one for another day. Meanwhile, maybe Swiss Miss can stem that craving for tablea cocoa that I sparked.