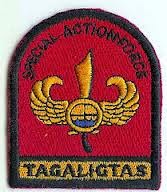 Manila, December 21 - With just a few days left before Christmas, at around 8pm, two robbers held up a man at an ATM in a dark portion of Broadway in New Manila, minutes after the man withdrew money from an ATM machine. The robbers knifed the man on the side of his face just before his left ear and on the chest.  Unknown to the two thieves, the man was an ex-Special Action Force personnel and trained for close quarter battle who was able to draw his sidearm and shoot them both.

The victim of the foiled knife attack and robbery was a security detail of an ex-DILG chief, Raffy Alunan III, and is currently recovering at the hospital nearby.