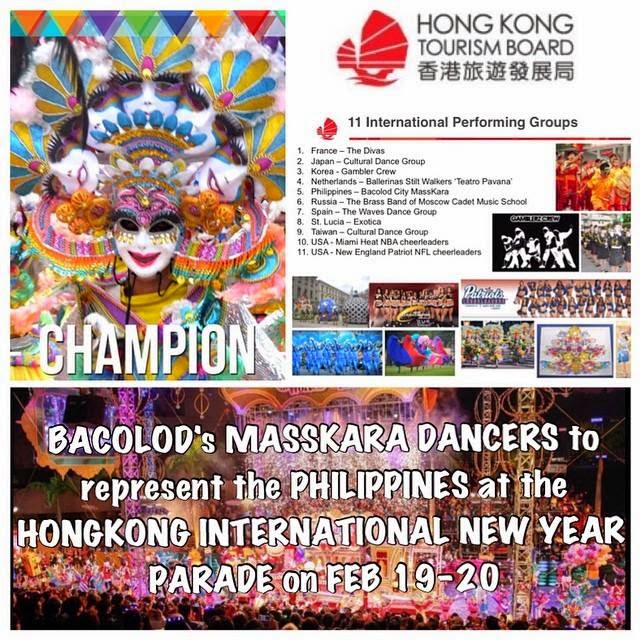 Every year, tens of thousands line the streets of Tsim Sha Tsui in Hong Kong to witness the International Chinese New Year Night Parade – a spectacle of dazzling performers from Hong Kong and abroad that turns the whole harbour-front area into a giant outdoor street party. This is where the world comes to celebrate the Chinese New Year.

This year will really be very special for Hong Kong and the City of Bacolod, Philippines.

The Hong Kong Tourism Board has invited the Bacolod MassKara 2014 Barangay Champion dancers, Brgy. Granada, to represent the Philippines and perform during the Chinese New Year Celebration at the HK International New Year Parade on Feb. 19 & 20, 2015.  The fame of Bacolod's Masskara Festival is indeed going worldwide as it has also garnered other awards such as the Philippine Independence Day Parade, staged annually along Madison Avenue in Manhattan, New York, and where the Bacolod Masskara (New York Edition) has won consecutively for the past 3 years!

Chinese New Year is without a doubt the biggest (and most-adored) festival of the lunar calendar, with 15-days packed full of age-old traditions, cultural festivities and family celebrations.  Hong Kong will surely be treated to the unique flavor of Bacolod's Masskara Dancers and its high energy beat.

For those who are planning to go to Hong Kong this first quarter of 2015, February 19 and 20 would be great days to be there.