Home » - • Talonggo Profiles » Features » News » Who is the Ilongga who goes by the name of Grace Poe?

Who is the Ilongga who goes by the name of Grace Poe? 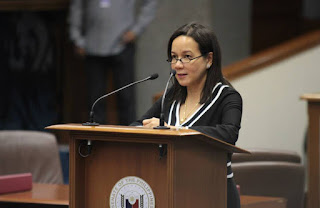 Who is the Ilongga who goes by the name of Grace Poe?

Here are excerpts of the Wikipedia document on her:

Mary Grace Sonora Poe-Llamanzares (September 3, 1968), commonly known as Grace Poe-Llamanzares or Grace Poe, is a Filipino politician who served as chairperson of the Movie and Television Review and Classification Board (MTRCB) from 2010 to 2012. Born in Iloilo but abandoned by her biological mother at birth, she was adopted by National Artist Fernando Poe, Jr. and his wife Susan Roces.

Educated in the Philippines and the United States, where she was a graduate of Boston College, Poe spent much of her adult life in the United States before returning home after her father, who ran in a disputed presidential election in 2004, died later that year.

Following her father's death, Poe permanently returned to the Philippines, where she started getting involved in politics. In particular, she began attracting national attention for pursuing her father's fight for closure over the results of the election, which he believed he rightfully won, and campaigned against further electoral fraud. In 2010, she was appointed by President Benigno Aquino III as chairman of the Movie and Television Review and Classification Board (MTRCB), where she advocated for a progressive agency that would promote a culture of intelligent media viewership, while at the same time supporting the further development of the country's film and television industries.

In 2012, Poe launched her candidacy for a seat in the Senate, running in the 2013 senatorial election as an independent affiliated with the Team PNoy coalition of President Aquino. Although initially faring poorly at the start of the campaign season, she unexpectedly won a seat in the election with the most votes of any single candidate.


Mary Grace Poe was born on September 3, 1968 in Iloilo City. Her biological parents are unknown and she was found abandoned as a baby by a woman named Chayong Militar,[1][2][3] (also called "Sayong")[4] allegedly in the holy water font of Jaro Metropolitan Cathedral, the main church of the city.[4] When the infant was discovered, the parish priest named her "Grace" in the belief that her finding was through the grace of God;[3] she was christened by Jaime Sin, the Archbishop of Jaro and later Archbishop of Manila.[5] Although the cathedral issued an announcement in the hopes that her biological mother would claim her,[3] no one stepped forward. Grace was taken in by the Militar family,[6] with Chayong's in-law Edgardo, who is a signatory on the child's foundling certificate, being a possible father.[5] Chayong Militar later passed Grace on to her friend Tessie Ledesma Valencia,[2] an unmarried, childless heiress of a wealthy sugar baron from Bacolod, Negros Occidental.[6]
Valencia was also friends with film stars Fernando Poe, Jr. and Susan Roces (real name: Jesusa Sonora), who were newlyweds at the time; Valencia was a big fan of Roces, and the former would bring Grace on frequent trips between Bacolod and Manila.[3] The Poes took Grace in after Valencia decided the baby would be better off with two parents in the Philippines, than with her as a single parent in the United States, where she was moving to.[3][6] Militar was initially hesitant in letting Poe and Roces adopt Grace because she was not familiar with them, having entrusted the baby to Valencia, but was convinced by Archbishop Sin to let the couple adopt her.[4] Poe was later legally adopted by the couple after further efforts to search for her biological parents failed,[6] and attended elementary school at Saint Paul College of Makati.[7]