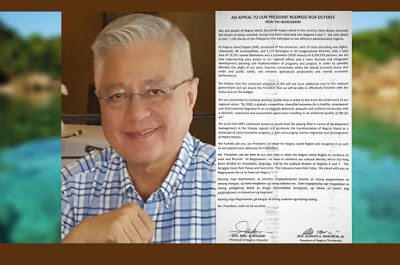 From his Facebook page, Former Secretary Alunan stated, "I support the petition to save the Negros Island Region (NIR-18) from dissolution. The integration of Negros Island's 2 provinces makes sense in all respects. Let's keep petty politics out of it. No to urong-sulong behavior that keeps us frozen and backward."

"Integration makes sense for all the right reasons - economic, social, governance, security", Alunan added. "For those who weren't paying attention, Negros Island was formed into one contiguous region already last year.  Integration makes economic and governance sense for long term growth and development. Scuttling it will again restore past economic inefficiencies in development planning and execution, and increased costs in governance."

AN APPEAL TO OUR PRESIDENT RODRIGO ROA DUTERTE FROM THE NEGROSANON

We, the people of Negros Island, the fourth largest island in the country, have always nurtured the dream of being reunited, having long been separated into Regions 6 and 7, the only island in over 7,100 islands of the Philippines that belonged to two different administrative regions.


As Negros Island Region (NIR), composed of two provinces, with 19 cities (including one highly-urbanized), 38 municipalities, and 1,219 barangays in 10 Congressional Districts; with a land area of 13,351 square kilometers anda population (2010 census) of 4,194,525 persons, we are now experiencing easy access to our regional offices and a more focused and integrated development planning and implementation of programs and projects in order to speedily alleviate the plight of our poor, improve connectivity within the island, promote peace and order and public safety, and enhance agricultural productivity and overall economic performance.

We believe that the continued existence of NIR will not incur additional cost to the national government and we assure the President that we will be able to effectively function with the status quo on the budget.


We are committed to continue working double-time in order to fast-track the attainment of our regional vision: “By 2040, a globally competitive, diversified economy for a healthy, empowered and God-centered Negrense in an ecologically-balanced, peaceful and resilient community with a dynamic, responsive and accountable governance resulting in an enhanced quality of life for all.”


We trust that NIR’s continued existence would level the playing field in terms of development management in the Visayas regions and accelerate the transformation of Negros Island as a showcase of socio-economic progress, in turn encouraging reverse migration and decongestion of Metro Manila.


We humbly ask you, our President, to retain the Negros Island Region and recognize it as such as we support your advocacy for Federalism.


Mr. President, we are here to ask your help to allow the Negros Island Region to continue to exist and flourish. As Negrosanon, we need to reinforce our cultural identity which has long been divided by mountains, language, and by the political division of Regions 6 and 7. The Ilonggos have their Panay and Guimaras. The Cebuanos have their Cebu. We plead with you as Negrosanon for us to have our Negros.